What does one make of instances like these. Even as the bomb blasts were to take place, earlier in the day thousands of people went through state supported terrorism. Who were the local politicians, cops and other officials who in the first place allowed the slums to come up over the years?

Arent the pictures below more sad than ones from the attack?

636 homes on Mumbai varsity land flattened in matter of hours

Mumbai: Men, women and children were brutally thrashed by lathi-wielding cops at the Valmiki Nagar slums in Bandra-Kurla Complex during a drive on Wednesday to evict encroachers from the Mumbai University land. The BMC and suburban collector’s office conducted the drive following a Bombay high court order to raze the illegal slums.

In the space of a few hours, 636 homes—spread over an area of 7,200 sq-mt—were razed to the ground, deputy municipal commissioner Milind Shambharkar said.

The slumdwellers began with a Gandhian-style protest against the authorities as women and children sat on the road outside their homes in a bid to block the cavalcade of over 100 cops, 80 labourers and JCBs.

In order to scatter the crowd, an excavator drove straight at the slumdwellers sitting on the road, forcing them to flee. The pick-up arm of the excavator began rotating around the area, causing panic. Lobbing teargas shells, the cops then lathicharged the slumdwellers. Residents of the slum then began pelting stones at the cops.

However, BKC police official Ralphie Pariera denied all charges of brutality and said cops had resorted to a mild lathicharge. TOI, however, witnessed several children being flogged. A woman was seen sobbing on the road after the demolition as she could not find her son.

The collector’s office claimed slumdwellers were given adequate notice before the demolitions, residents said they were unaware of the situation till a day before that. Advocate Gayatri Singh intervened on behalf of the slumdwellers in the high court on Tuesday and her intervention was heard in court on Wednesday. But the judge who passed the original order was not present in court on Wednesday and so the judges who heard the matter postponed the hearing to Thursday. The slums, however, were razed on Wednesday.

The issue of encroachment cropped up after a PIL filed in 2001 by advocate M P Vashi, who wanted the Fort campus of Mumbai University shifted to Kalina to make way for the expansion of the high court. The high court in 2006 ordered the demolition of the encroached area before December 31, 2007, but when the deadline was not met, Vashi filed for contempt of court in 2008.

Most of the slumdwellers have documents to prove they were residents here well before 1995. Though slums constructed before 1995 cannot be demolished without the slumdwellers being rehabilitated, BMC officials say the court felt that this clause did not apply to university land.

Congress North West District secretary M G Kaiser was present at the demolition site and tried to intervene on behalf of the slumdwellers along with other Congress party workers.

‘Policemen chased boy, beat him up’A TOI reporter, along with a colleague from another publication, spotted a boy in pain after the police lathi-charge, hobbling along the the road. He was on the the street opposite the slums that were being demolished. When the boy was approached, he began recounting how he was beaten up by the cops. On seeing the boy recounting his woes, the cops chased him away. The boy was then again thrashed up by the policemen. TNN 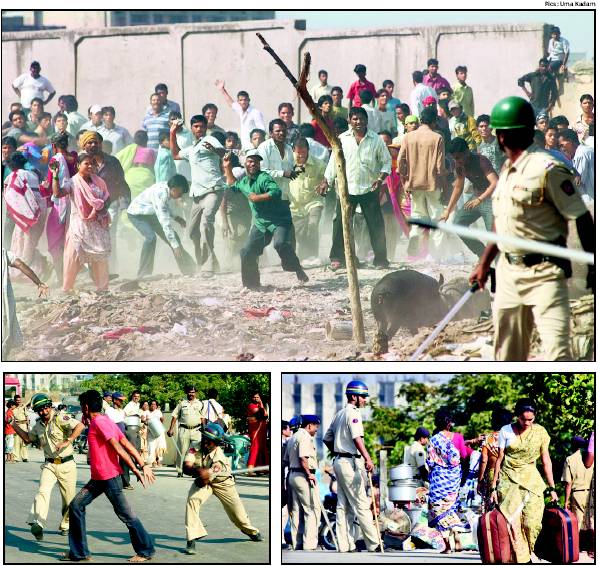 WEDNESDAY DRAMA : (From top clockwise) Residents pelted stones at policemen after they were caned and forced to move out of Valmiki Nagar slums in BKC

I am somewhere a firm believer of terrorist attacks being diversionary tactics by vested interests.

Can fiction give a better explanation than our news channels and extensive analyses to the blasts and terrorism that happens all so frequently? In July 08 either star movies or HBO ran Batman Returns a number of times over. A Batman fan always, it was a treat. It was also very interesting to revisit Oswald Cobblepot and the deep similarities with a lot of politicians and disgruntled elements that may be there in the Indian context.

July was also the time when the UPA Government went ahead and signed the nuclear agreement with the US and the Left and the BJP made an ass of themselves with their undue obstinacy and lack of any credible position on the nuclear issue.

July also saw the Jaipur blasts and L K Advani’s resurgent demand for bringing back POTA. The sequence of events was as such:

It was exactly around the same time that Batman Returns was being played on the TV and I coudnt help getting startled with the uncanny resemblance to what was happening in the movie and what I was seeing around. Could fiction be true than what the News Channels show?

Every body who takes interest in the bomb blasts and has a simplistic view of Islamic terrorists alone being responsible for the blasts needs to watch the movie. Its a fantastic instance of using the power of story telling and fictional characters to drive home the point about deep seated human emotions and states of being. Any of our politicians could be Oswald Cobblepot. He anyways bears a striking resemblance to L K Advani whom I have always held responsible for the 1993 Bombay blasts. One cannot at times empathise with the life that Cobblepot has gone through, his lack of sensation over any damage his actions cause, his need for revenge against people. the need to belong, be appreciated.

Most of the real terrorists in my opinion roam the country scotfree and we know them all and even give Z class security to many of them. Understanding Cobblepot is the key to understand these terrorists.