I spent December visiting various wastewater treatment facilities and researching on the processes and technology running each facility. Many of these technologies I had already been aware with or interacted but this time it was spending time in detail.

Each facility was marked with the simplicity of process and its eco-friendliness. Each process was treating dirty foul smelling sewage, which you could not stand from a few metres away and generating clear water which you hold in a bottle and bring close to your nose for smelling. With one more treatment level the water could be made potable.

A number of processes in application currently are energy guzzling and use polluting inorganic processes. None of this was the case with these processes.

At a time when all our rivers and wetlands are fouled with sewage and there is a looming water crisis it should be imperative upon every body to adopt such technologies in their circle of influence. And clearly the processes are available to ensure that not a single litre of sewage has to be discharged untreated. Sewage should be preferably treated at the source of generation and not be transported to centralised sewage treatment plants.

Swacch Bharat will be achieved when we have the intelligence to scale up the processes below and support knowledgeable people like showcased in this post.

The first facility I visited was a constructed wetland in Aligarh Muslim University, created as part of a Department of Science – EU collaborative project Safeguarding Water Resources in India with Green and Sustainable Technologies (SWINGS). I was visiting Aligarh to meet my childhood friend Hamid who stays there and his wife is a professor at the University. He knew my interest and was kind enough to organise the visit.

1. What goes in is the black sewage on the right and what comes out is clear water like on the left. The black water is what goes down your toilet, comes from the washing machine, washing utensils, bathroom etc. When it goes untreated or partially treated into the rivers then that is the colour it imparts to the river as well.

3. Through a process called UASB (read here) the first round of cleaning the sewage happens and the water is treated upto fifty percent.

4. In the second stage the treated water flows into the Syphon tank where using a mechanical process the water is pushed with force into the constructed wetland bed at a lower height than the Syphon tank. 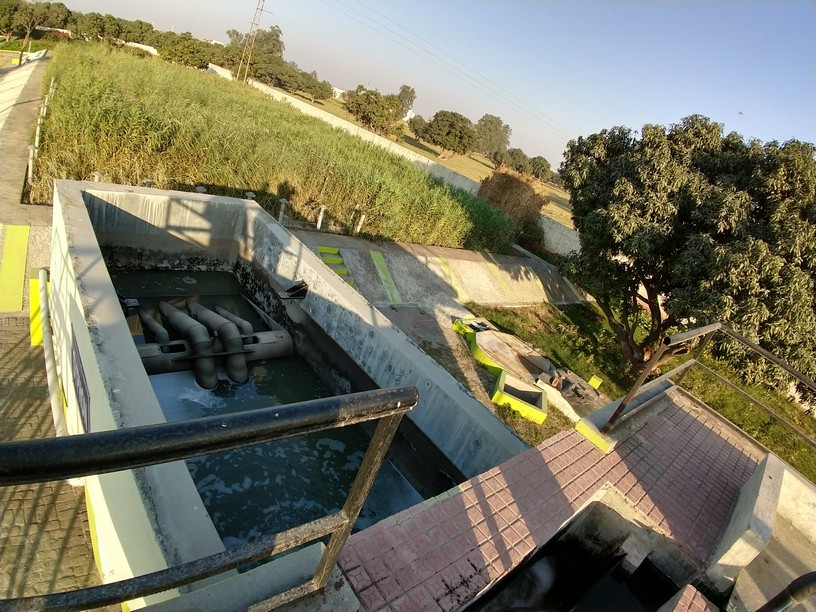 5. The constructed wetland has considerable amount of thought gone into its planning and design to ensure that the semi-treated water is optimally distributed through the wetland bed where plants specifically selected for their ability to remedy the water are planted. This is the primary bed and is raised about a metre above the ground. 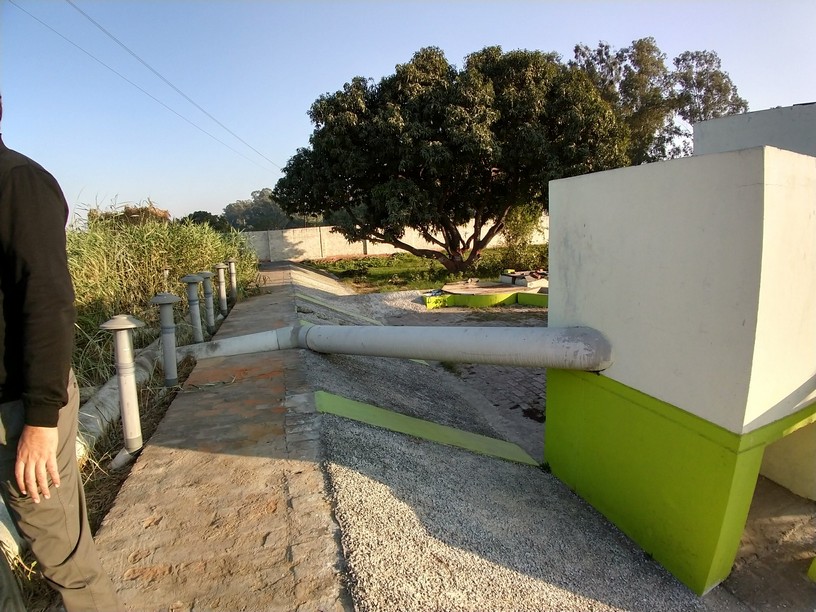 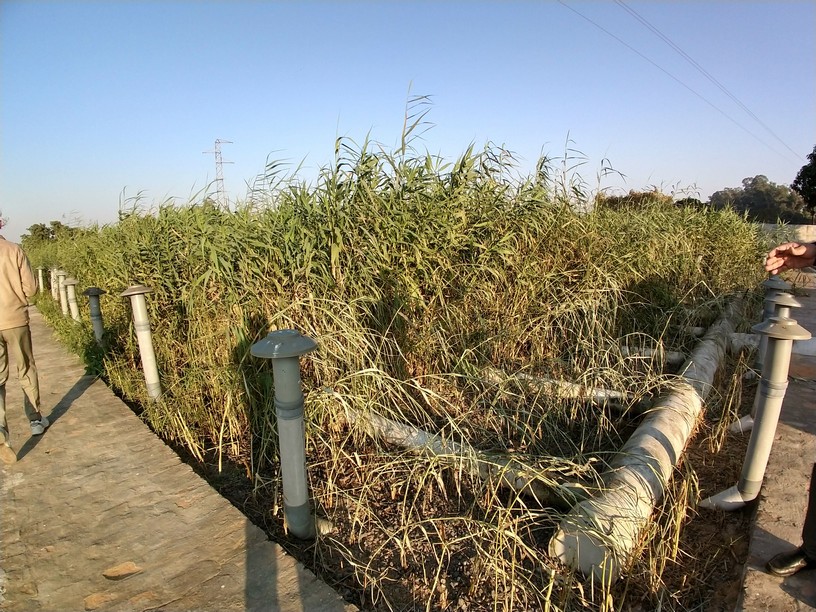 6. From the primary bed the water flows down into a secondary bed, where a different set of plants leads to secondary treatment.

7. This is the quality of the water at this point.

8. The treated effluent is discharged into the drains and part of it is used for irrigation purposes in the surrounding fields.

9.This is the treated effluent, which is released into the drains. 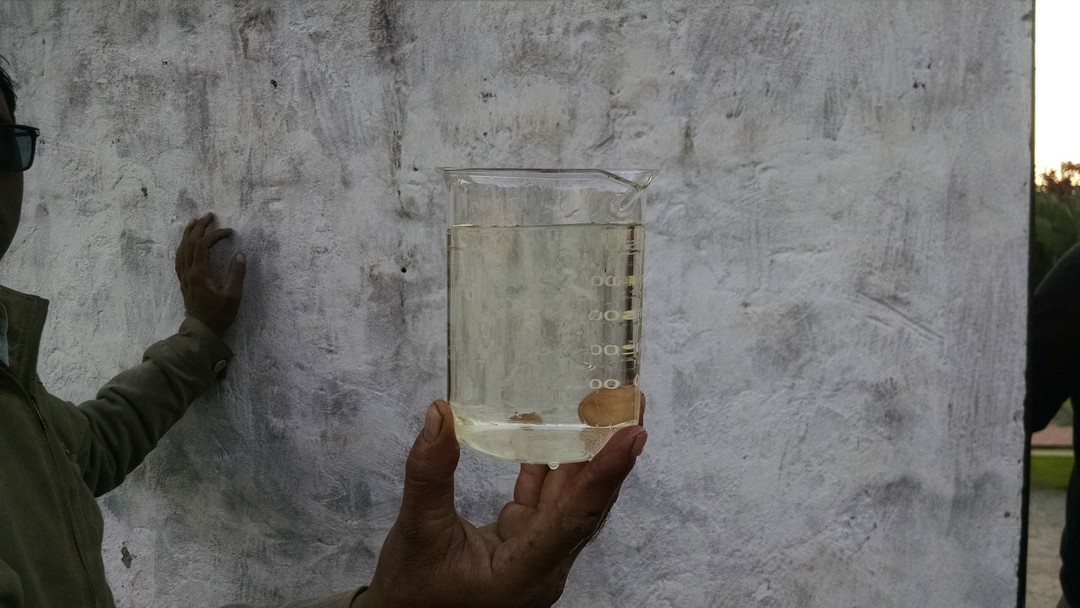 10. With one more level of treatment using either UV or AO process the water can be made drinkable. The scientists from the EU who were part of the project used to drink this water during the time they spent here. That’s clear drinkable water in the beaker!

11. With my friend Hamid Qadeer on the left and Prof. Nadeem Khalil on the right. 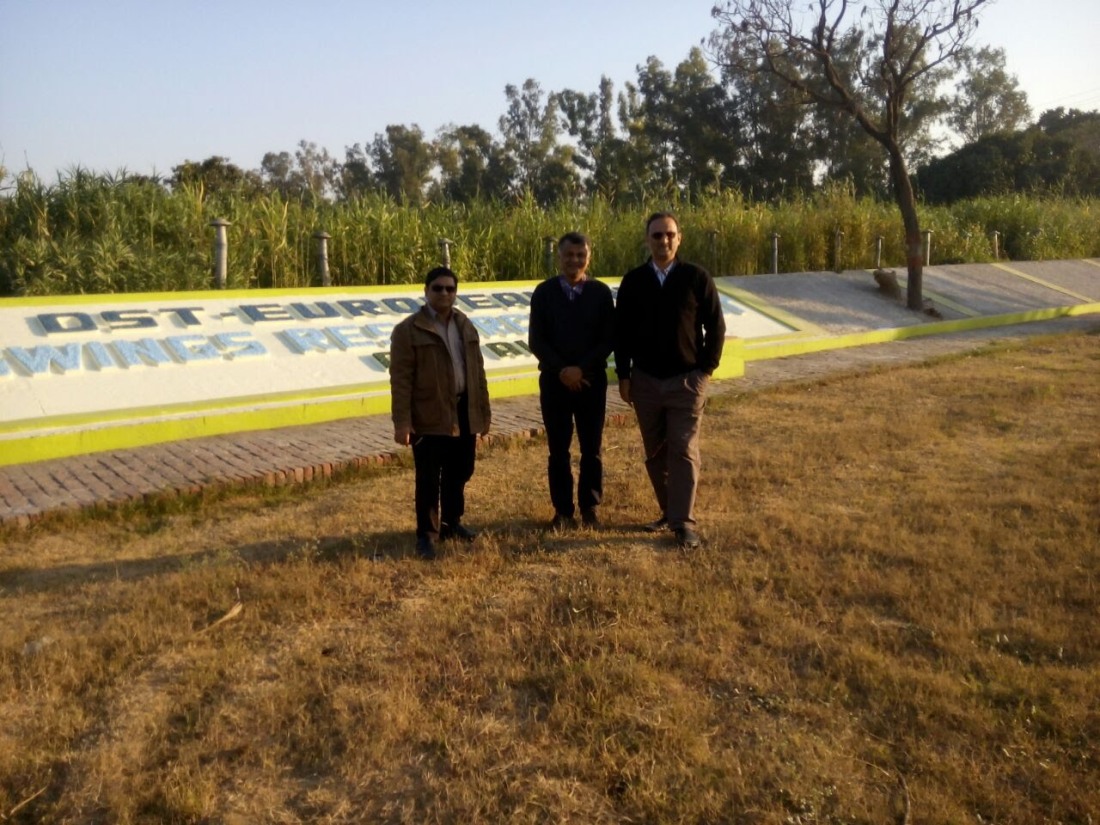 2. Soil Biotech Technology for a housing society in Virar

The second facility I visited was as part of a workshop and training program organised by Centre for Sustainable Environment and Development Initiatives (CSEDI). The three day workshop dealt with the rural context and a field visit was part of the training.

80,000 litres in a residential complex was being treated by Vision Earthcare a startup incubated in the IIT-SINE and having a technology partnership to use the patented soil bio technology developed by Prof. H S Shankar.

We were shown the treatment beds where the soil bio technology media was added for  the process of remedying the sewage. The treated water is then reused for the purpose of flushing. The beds themselves were beautifully landscaped and the first impression clearly is that this is the society garden and not a sewage treatment plant. In this case the plants themselves play no role in the process and are purely for ornamental purposes.

Since there is water shortage in Virar, tanker water supply is a regular expenditure and the society was able to save on the same. The excess water was discharged into the storm water drain.

2. On left is the sewage collection tank and right is the network of pipes which carries out the sewage and spreads it in the bed, which has the soil biotech medium which remedies the water. 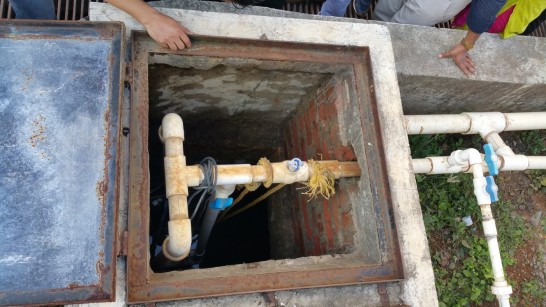 3. After the remedial action of the soil biotech bed what emerges is clear transparent water

4. On the right hand side is the soil biotech bed below the landscaping which remedies the waste water.

3. Biosanitizer in a commercial building in Nariman Point

The third visit as part of the same training mentioned in point 2 was to a commercial building in Nariman Point which was treating 90,000 litres of its sewage within the compound using Biosanitizer technology.

Biosanitizer is a product emerging from the same research at IIT Bombay into soil biotechnology. It is developed by Prof. Bhawalkar and available in the form of crystals which are added to the sewage and create the remedying process which cleans up the water.

The building had adopted the Biosanitizer based method three years back by replacing its existing process, which was based on conventional processes requiring frequent addition of inorganic chemicals and use of electricity for aeration purposes. And was yet giving treated effluent which was showing odour and colour while used for flushing in the offices.

After adopting the Biosanitizer based method the building was happy with the results. Their recurring expenditure on consumables had become zero and the electricity consumption reduced significantly.

This process seems space saving and in the Mumbai context that is a key criteria.

Workshop participants in conversation with the Managing Committee member of building. The wastewater is collected in a tank behind and dosed with the Biosanitizer.

This visit was not in December but a month before and it was most impressive to see seventh and eight standard students go about using phytoremediation to treat sewage from the neighbouring drains as part of their science project! Their enthusiastic science teacher Krishna Ma’am and Principal were as much a delight to meet.

It was the sharpest most energetic and enthusiastic bunch I had met in a long time and it was a pleasure to meet them. Just goes to show just how much talent is available to solve all our problems. 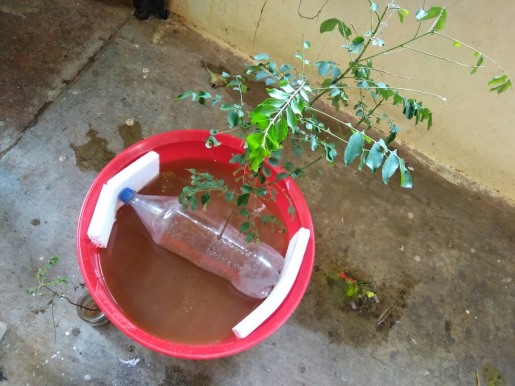 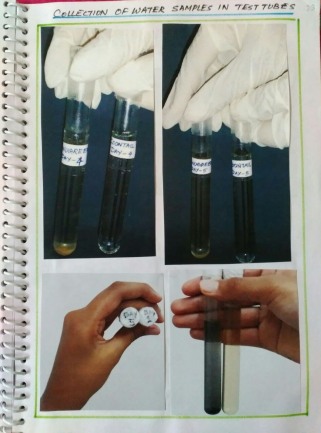 Finally this is the information I received from Raashid one of the workshop participants. Only numbers which fail to impress anymore. Need to know what is the outcome after so much expenditure.

[ This work has happened under the aegis of Mumbai Sustainability Network (MSC) a registered non-profit, committed to the mainstreaming of sustainability pathways. Along with the support and collaboration with Centre for Sustainable Environment and Development Initiatives (CSEDI). If you feel this information is useful for society please consider supporting the work of MSC]

I am an environmental activist based in Mumbai, who has been closely involved with numerous issues in Mumbai since the late 90s. Began activism in my early 20's. Deep philosophical interest in nature, sustainability and the purpose of human life since an early age. In the decade of 2001-10 I played a pioneering role towards the conservation of mangrove forests in Mumbai co-founding Mangrove Society of India (Mumbai Chapter) and managing the Chapter for a decade. Have worked on numerous urban issues in Mumbai aimed at improving the quality of life of Mumbai citizens. Solid waste management, tree cover, public transport, municipal budget and governance. View all posts by Rishi

3 thoughts on “Treat your sewage!”